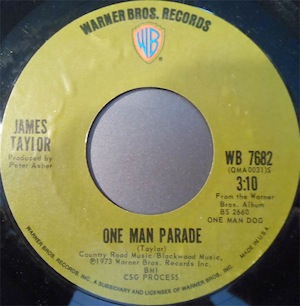 About One Man Parade

"One Man Parade" is a song written by James Taylor that was first released as the first track on his 1972 album One Man Dog. It was also released as the second single from the album, following up on the Top 20 hit "Don't Let Me Be Lonely Tonight," after receiving significant airplay as an album track. The single was issued twice with two different B-sides, "Hymn" and "Nobody But You." It did not achieve the same chart success as "Don't Let Me Be Lonely Tonight," peaking at #67 on the Billboard Hot 100. It also charted on the Adult Contemporary chart in Canada, reaching #55. In some countries, such as in Europe, it was released as the B-side of the single release of "One Morning in May." more »

James Vernon Taylor (born March 12, 1948) is an American singer-songwriter and guitarist. A five-time Grammy Award winner, Taylor was inducted into the Rock & Roll Hall of Fame in 2000. more »

Discuss the One Man Parade Lyrics with the community:

Know any other songs by James Taylor? Don't keep it to yourself!