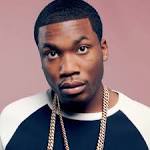 Discuss the Oodles O' Noodles Babies Lyrics with the community:

Know any other songs by Meek Mill? Don't keep it to yourself!