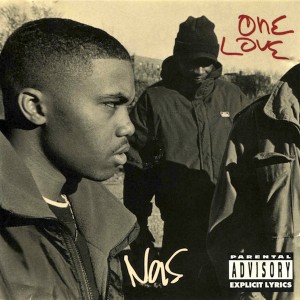 "One Love" is a song by American rapper Nas, released October 25, 1994 on Columbia Records. It was issued as the fifth and final radio single in promotion of his debut studio album Illmatic (1994). The song was produced by Q-Tip of A Tribe Called Quest, who also contributed vocals for the chorus line. According to Nas, the title of the song originates from Jamaican singer-songwriter and musician Bob Marley's song of the same name. "One Love" is composed as a series of letters written by Nas to his incarcerated friends, describing events that have occurred prior to and after the receivers' imprisonment. "One Love" contains samples of the Heath Brothers' "Smilin' Billy Suite Part II" (1975) and Parliament's "Come in out the Rain" (1970). In the song's first verse, Nas references fellow Queensbridge emcee Cormega, whose rapping career had been put on hold due to his incarceration during the early 1990s. In 2008, VH1 named "One Love" the forty-eighth greatest hip hop song. more »

Nasir bin Olu Dara Jones ( /nɑːˈsɪər/; born September 14, 1973), better known mononymously as Nas ( /ˈnɑːz/), is an American rapper and actor. He is also the son of jazz musician Olu Dara. Nas has released eight consecutive platinum and multi-platinum albums since 1994, four of which topped the Billboard charts upon release and has sold over thirteen-million records in the United States alone. Nas was also part of the hip hop supergroup The Firm, which released one album under Dr. Dre's record label Aftermath. Aside from rapping, Nas is also an occasional actor and has appeared in feature films such as Hype Williams' directorial debut Belly, Ticker and In Too Deep and the television show Hawaii Five-0. more »

Discuss the One Love Lyrics with the community:

Know any other songs by Nas? Don't keep it to yourself!