You Gots to Chill 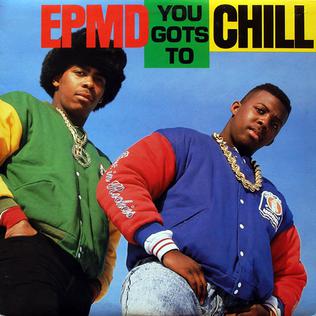 About You Gots to Chill

"You Gots to Chill" is the second single by EPMD from their 1988 debut album Strictly Business. It reached number 22 on the U. S. R&B chart. The song prominently features a sample from "More Bounce to the Ounce" by Zapp and "Jungle Boogie" by Kool & the Gang. This song is widely considered to be a hip hop classic and has been paid homage by various rappers who have quoted the lyrics to this song in their own music, including Snoop Dogg and LL Cool J, among others.

EPMD is an American hip hop group from Brentwood, New York. The group's name is a concatenation of the members' name "E" and "PMD" or an acronym for "Erick and Parish Making Dollars", referencing its members, emcees Erick Sermon ("E" aka E Double) and Parish Smith ("PMD" aka Parish Mic Doc). The group has been active for 26 years (minus two breakups in 1993 and 1999), and is one of the most prominent acts in east coast hip hop. Diamond J, DJ K La Boss, and DJ Scratch were DJs for the group. more »

Discuss the You Gots to Chill Lyrics with the community:

Know any other songs by EPMD? Don't keep it to yourself!

You Gots to Chill

Manic Monday reached number two on the UK Chart in 1986 for The Bangles but which pop superstar actually wrote the song and gave it to the lead singer (Susanna Hoffs) in order to try and win her affection?