Gordon Matthew Thomas SumnerCBE (born 2 October 1951), known by his stage name Sting, is an English musician, singer-songwriter, multi-instrumentalist, activist, actor and philanthropist. Prior to starting his solo career, he was the principal songwriter, lead singer and bassist for the rock band The Police. more »

Discuss the The Last Ship (Reprise) Lyrics with the community:

Know any other songs by Sting? Don't keep it to yourself! 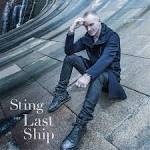