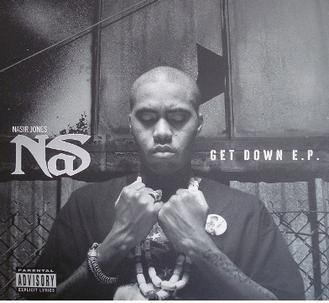 "Get Down" is the third and final single released from Nas' 2002 album God's Son. It features descriptive storytelling by Nas and funk-based production by Nas and Salaam Remi. In addition to elements of Funky Drummer, the track samples "The Boss" by James Brown which was previously made famous by the West Coast rapper Ice-T on his 1990 single "You Played Yourself"; the same sample was used in Poor Righteous Teachers' song "Word from the Wise" and Lord Finesse's "Bad Mutha". It was not as popular as Nas' previous two singles from God's Son, but still reached #76 on the Hot R&B/Hip-Hop Singles & Tracks chart.  more »

Nasir bin Olu Dara Jones ( /nɑːˈsɪər/; born September 14, 1973), better known mononymously as Nas ( /ˈnɑːz/), is an American rapper and actor. He is also the son of jazz musician Olu Dara. Nas has released eight consecutive platinum and multi-platinum albums since 1994, four of which topped the Billboard charts upon release and has sold over thirteen-million records in the United States alone. Nas was also part of the hip hop supergroup The Firm, which released one album under Dr. Dre's record label Aftermath. Aside from rapping, Nas is also an occasional actor and has appeared in feature films such as Hype Williams' directorial debut Belly, Ticker and In Too Deep and the television show Hawaii Five-0. more »

Discuss the Get Down Lyrics with the community:

Know any other songs by Nas? Don't keep it to yourself!

Which of the following songs has won the Academy Award for 'Best Original Song'?