"Goodbye" is the fourth single of the hip hop group Slaughterhouse from their album Welcome to: Our House, which was released on August 28, 2012. The song features Ming-Xia formally of The Spooks. The song features production by Boi-1da. It was available to purchase on iTunes on August 14, 2012. There is a remix featuring Fat Joe, dedicated to Chris Lighty.

Struggling with Goodbye? Become a better singer in 30 days with these videos!

Slaughterhouse is a hip hop supergroup consisting of rappers Crooked I, Joe Budden, Joell Ortiz, and Royce da 5'9". They are currently signed to Shady and Interscope Records. more »

Discuss the Goodbye Lyrics with the community:

Know any other songs by Slaughterhouse? Don't keep it to yourself!

Welcome To: Our House [Deluxe Edition] 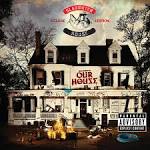