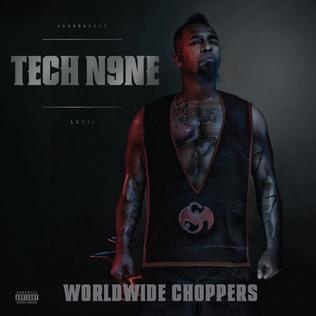 "Worldwide Choppers" is a song by American rapper Tech N9ne. It serves as the third single from his eleventh studio album All 6's and 7's. The song is noted for its breakneck flows packing rhythmic, rapid-fire rap."Worldwide Choppers", produced by Michael Summers known as producer Seven, is a multilingual track that includes lyrics in English, Danish and Turkish. Turkish lyrics are by Turkish rapper Ceza and Danish lyrics by Danish rapper U$O. Other rappers taking part in the single are Busta Rhymes, Yelawolf, Twista, D-Loc, JL of B. Hood & Twisted Insane. It was recorded with contributions from a number of locations, more specifically Kansas City, Missouri (JL), Kansas City, Kansas (D-Loc) Alabama (Yelawolf), Chicago (Twista), New York (Busta Rhymes), California (Twisted Insane) in addition to Turkey (Ceza) and Denmark (U$O). The names of the rappers and their locations are introduced within the recording by name. more »

Aaron Dontez Yates (born November 8, 1971), better known by his stage name Tech N9ne (pronounced "Tech Nine"), is an American rapper from Kansas City, Missouri. In 1999, Yates and Travis O'Guin founded the record label Strange Music. Throughout his career, Yates has sold over one million albums and has had his music featured in film, television, and video games. In 2009, he won the Left Field Woodie award at the mtvU Woodie Awards. more »

Discuss the Worldwide Choppers Lyrics with the community:

Know any other songs by Tech N9ne? Don't keep it to yourself!