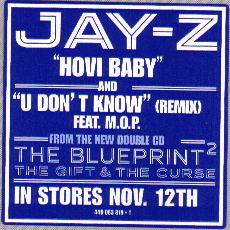 "Hovi Baby" is a song by Jay-Z from his album The Blueprint 2: The Gift & The Curse. It was released as the second single from the album. The song is produced by Just Blaze and contains a sample of the live version of "Diggin' on You" by TLC. It peaked at number 76 on the Hot R&B/Hip-Hop Songs chart. The song is mainly Jay-Z boasting of his success in rap. At one point he hints that only 2Pac and the Notorious B. I. G. might be considered as good: Ain't no livin person can test himOnly two restin' in heavenCan be mentioned in the same breath as him No music video was made for "Hovi Baby", but the song was used in a Reebok ad, with the lyrics slightly altered. The B-side of the single features a track also produced by Just Blaze, "U Don't Know (Remix)", featuring M. O. P.. more »

Shawn Corey Carter (born December 4, 1969), better known by his stage name Jay-Z, is an American rapper, record producer, entrepreneur, and occasional actor. He is one of the most financially successful hip hop artists and entrepreneurs in America. In 2012, Forbes estimated Carter's net worth at nearly $500 million. He has sold approximately 50 million albums worldwide, while receiving fourteen Grammy Awards for his musical work, and numerous additional nominations. He is consistently ranked as one of the greatest rappers of all-time. He was ranked #1 by MTV in their list of The Greatest MCs of All-Time in 2006. Two of his albums, Reasonable Doubt (1996) and The Blueprint (2001) are considered landmarks in the genre with both of them being ranked in Rolling S… more »

Discuss the Hovi Baby Lyrics with the community:

Know any other songs by Jay-Z? Don't keep it to yourself!