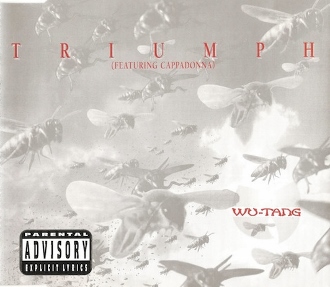 "Triumph" is a song by American hip hop group Wu-Tang Clan, from their 1997 album Wu-Tang Forever. It was released as the lead single from the album in February 1997. The song does not have a chorus, instead, solely consisting of an intro and interlude by Ol' Dirty Bastard and verses from the other eight Wu-Tang members and associate (and future member) Cappadonna. It is the only Wu-Tang song featuring all members.

Struggling with Triumph? Become a better singer in 30 days with these videos!

The Wu-Tang Clan /ˈwuːtæŋ/ is an American rap group from Staten Island, New York that consists of RZA, GZA, Method Man, Raekwon, Ghostface Killah, Inspectah Deck, U-God, Masta Killa, and the late Ol' Dirty Bastard. They are frequently joined by fellow childhood friend Cappadonna, a quasi-member of the group. They were formed in (and are associated with) the New York City borough of Staten Island (U-God, Method Man, RZA, Ghostface Killah and Raekwon) (referred to by members as "Shaolin"), though some of their members are from Brooklyn (Ol Dirty Bastard, GZA and Masta Killa). more »

Discuss the Triumph Lyrics with the community:

Know any other songs by Wu-Tang Clan? Don't keep it to yourself!