Westside Connection was an American gangsta rap supergroup formed by Ice Cube, WC and Mack 10. The group's debut album, Bow Down, reached the number 2 position on the Billboard 200 in 1996, going platinum that year. more »

Discuss the All the Critics in New York [Edited] Lyrics with the community:

Know any other songs by Westside Connection? Don't keep it to yourself!

The Best of Westside Connection [Clean] 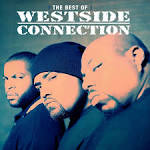