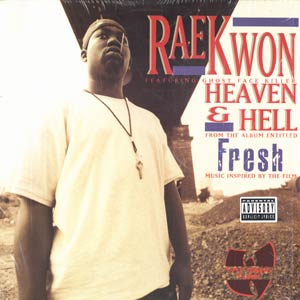 "Heaven & Hell" is the solo debut single by Wu-Tang Clan rapper Raekwon, released as the lead single from his solo debut album Only Built 4 Cuban Linx.... It features fellow Wu-Tang Clan member Ghostface Killah and backing vocals from Wu-Tang affiliate singer Blue Raspberry. Allmusic stated "everything culminates in "Heaven & Hell" and its longing for redemption"As the rest of the album, the song was produced by the Wu-Tang Clan leader RZA and contains a sample from "Could I Be Falling in Love?" by Syl Johnson, reached #34 in the Hot Dance Music/Maxi-Singles Sales in 1994, and #21 in the Hot Rap Singles in 1995. In 2006, German singer Joy Denalane recorded a completely reworked version of the song, under the title "Heaven or Hell", featuring Raekwon, for her album Born & Raised. The song also featured on the soundtrack to the 1994 film Fresh by Boaz Yakin. more »

Corey Woods (born January 12, 1970), better known by the stage name Raekwon, is an American rapper and a member of the Wu-Tang Clan. He released his solo debut, Only Built 4 Cuban Linx... in 1995, and has since recorded numerous solo albums, as well as continuing to work with Wu-Tang and providing an extensive number of guest contributions to other hip hop artist's works. more »

Discuss the Heaven & Hell Lyrics with the community:

Know any other songs by Raekwon? Don't keep it to yourself!