Nightmare on My Street 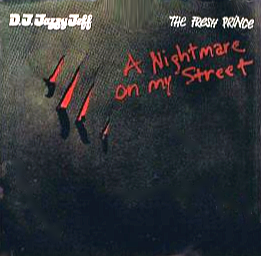 About Nightmare on My Street

"A Nightmare on My Street" is the third single from DJ Jazzy Jeff & The Fresh Prince's second studio album, He's the DJ, I'm the Rapper. The song became a crossover hit in the US, reaching #15 on the Hot 100. The song was released as a single in early 1988. The single was released on Vinyl and Audio Cassette Tape. The song was considered for inclusion in the movie A Nightmare on Elm Street 4: The Dream Master, but the producers of the film decided against its inclusion. New Line Cinema, copyright holders of the A Nightmare on Elm Street film franchise, sued DJ Jazzy Jeff & The Fresh Prince's record label for copyright infringement, forcing the label to destroy a music video produced for the song (though a copy of the video did survive and is available online). Both sides eventually settled out of court. But as a result, vinyl pressings of the album He's the DJ, I'm the Rapper contain a disclaimer sticker that says, "[This song] is not part of the soundtrack...and is not authorized, licensed, or affiliated with the Nightmare on Elm Street films." The song samples Charles Bernstein's musical motif from A Nightmare on Elm Street. more »

Discuss the Nightmare on My Street Lyrics with the community:

Know any other songs by DJ Jazzy Jeff & the Fresh Prince? Don't keep it to yourself!

Nightmare on My Street