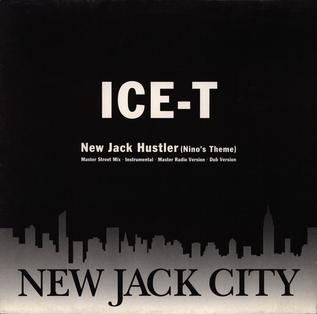 "New Jack Hustler (Nino's Theme)" is a song written and performed by American recording artist Ice-T. It was released as a single from the soundtrack album to the 1991 film New Jack City and from the rapper's fourth studio album O. G. Original Gangster. It was recorded at Wide Tracks Recording Studio in Hollywood, California, produced by Alphonso "DJ Aladdin" Henderson and Tracy "Ice-T" Marrow, and released in 1991 via Warner Bros. Records. Reaching a peak position of number 67 on the US Billboard Hot 100, the single remained on the chart for a total of 8 weeks. The single was nominated for Grammy Award for Best Rap Solo Performance at 34th Annual Grammy Awards, but lost to LL Cool J's "Mama Said Knock You Out". more »

Tracy Marrow (born February 16, 1958), better known by his stage name Ice-T, is an American rapper and actor. He was born in Newark, New Jersey, and moved to the Crenshaw district of Los Angeles when he was in the 7th grade. After graduating from high school, he served in the United States Army for four years. He began his career as a rapper in the 1980s and was signed to Sire Records in 1987, when he released his debut album Rhyme Pays, the first hip-hop album to carry an explicit content sticker. The next year, he founded the record label Rhyme Syndicate Records (named after his collective of fellow hip-hop artists called the Rhyme Syndicate) and released another album, Power. more »

Know any other songs by Ice-T? Don't keep it to yourself!