The TEN Tenors (also known as TTT) are an Australian music ensemble that has toured worldwide, been seen by more than 90 million people and attracted a vast international fan-base by performing a unique combination of classical and contemporary music featuring ten-part harmonies. First formed in 1995, the group has headlined more than 2000 concerts around the world (including the USA, Central and South America, Europe, Asia, Africa and New Zealand, 29 countries to date), sold more than 3.5 million concert tickets and become renowned for their dynamic, choreographed performances and skillful ability to seamlessly transition from operatic arias to soulful ballads through to chart-topping pop and rock songs. They have also been widely praised in the media, with The New York Times saying their “unique mix of the traditional and unconventional offers a fresh and highly-original take on the staid traditions of opera” and Variety describing them as “truly incandescent when performing at the full strength of 10”. They have shared the stage with artists including Lionel Richie, Rod Stewart, Andrea Boccelli, Willie Nelson, Alanis Morissette and Christina Aguilera. They have also appeared extensively on TV, including The Today Show, Today, Oprah’s Australian Adventure, and Extreme Makeover: Home Edition, as well as the Jerry Lewis MDA Telethon for an audience of 32 million viewers and the UEFA Euro 2012 in Warsaw, Poland. They have recorded extensively over the past 20 years, earning six platinum and gold records, and they have released12 studio albums as of 2018: Tenorissimo! (1998), Colours (1999), Untied/One Is Not Enough (2000), A Not So Silent Night (2001), Larger Than Life (2004), Here’s to the Heroes (2006), Nostalgica (2008), Double Platinum (2011), On Broadway (Vol. 1) (2014), Our Christmas Wish (2015), In Mezzo al Mare (2016) and Wish You Were Here (2017). They also recorded a live album in 2009, Amigos Para Siempre: Live in Madrid, as well as two compilation albums Tenology (2005) and The Best So Far (2018).

Update this biography »
Complete biography of The Ten Tenors » 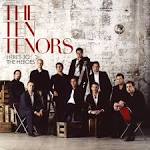 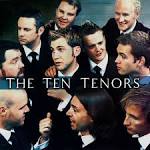 Share your thoughts on the The Ten Tenors Band with the community:

Missing lyrics by The Ten Tenors?

Know any other songs by The Ten Tenors? Don't keep it to yourself!

What was the name of the English rock band before it became the Beatles?