The Radiants were an American doo-wop and R&B group popular in the 1960s. The group formed in Chicago, Illinois, in 1960, where its members met singing in the youth choir of Greater Harvest Baptist Church. They performed both gospel and secular tunes, the latter of which were written by leader Maurice McAlister. While attempting to land a record deal, they found that labels weren't interested in gospel groups anymore, and concentrated on secular tunes, eventually landing a deal with Chess Records. Billy Davis produced their early records, including the first, "Father Knows Best" b/w "One Day I'll Show You", which was a regional hit in Cleveland in 1962. Several more singles for Chess followed, but didn't sell well, and by 1964 the group had more or less broken up. McAlister and baritone Wallace Sampson continued on as a trio with new member Leonard Caston, Jr. (son of Leonard Caston). With this lineup they had their biggest hit, 1964's "Voice Your Choice". The follow-up, "Ain't No Big Thing", was also a hit. Caston left the group in 1965, replaced by James Jameson. This lineup recorded only one single, "Baby You Got It", before McAlister departed. At this time, Chess had another group, The Confessions, led by Mitchell Bullock, on its roster, who had recorded the single "Don't It Make You Feel Kinda Bad" but broken up before the album's release. Billy Davis had Bullock join The Radiants with Sampson, Jameson, and Victor Caston, the younger brother of Leonard Jr.. The recording of "Don't It Make You Feel Kinda Bad" made by The Confessions was then issued under The Radiants' name in 1967. This lineup produced one more hit single, "Hold On", and after several more failed singles the group was dropped by Chess in 1969. They continued to perform together through 1972. McAlister and tenor Green McLauren also recorded as Maurice & Mac.

Update this biography »
Complete biography of The Radiants »

Albums by The RadiantsSort:By AlbumA - Z 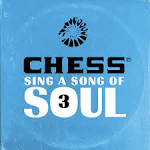 A Complete Introduction to Chess [2010]

Share your thoughts on the The Radiants Band with the community:

Missing lyrics by The Radiants?

Know any other songs by The Radiants? Don't keep it to yourself!

The song "Hey Jude" by the Beatles was sung by?