Gustav Elijah Åhr (November 1, 1996 – November 15, 2017), known professionally as Lil Peep (often stylized as LiL PEEP), was a Swedish-American rapper, singer, songwriter and model. He was known for helping pioneer a post-emo revival style of hip hop and rock music.Born in Allentown, Pennsylvania, and raised in Long Island, New York, Lil Peep started releasing music on SoundCloud in 2014, using the pseudonym Lil Peep because his mother had called him "Peep" since he was a child. He soon became popular on SoundCloud after releasing several mixtapes and for his collaborations with Lil Tracy, leading him to gain a cult-like following. He released his debut album, Come Over When You're Sober, on August 15, 2017. Following Lil Peep's death, Come Over When You're Sober, Pt. 1 entered the Billboard 200 at No. 168 and in the following week peaked at No. 38. Lil Peep earned his highest-charting single on the Billboard 200 in October 2018 with "Falling Down", featuring XXXTentacion, which peaked at 13th. The single was certified gold by the Recording Industry Association of America (RIAA) on November 8, 2018, making it Lil Peep's first gold certification. His second studio album, Come Over When You're Sober, Pt. 2, was released on November 9, 2018 and debuted at No. 4 on the Billboard 200, making it Lil Peep's first US top 10 album.Lil Peep was a frequent user of drugs due to his mental health issues, which ultimately caused his death on November 15, 2017. The Pima County Office of the Medical Examiner certified the cause of death to be an accidental fentanyl–xanax overdose. 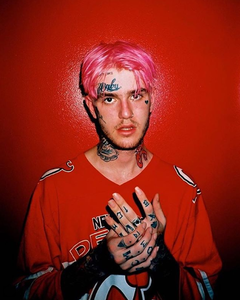 Share your thoughts on the Lil Peep Band with the community:

Know any other songs by Lil Peep? Don't keep it to yourself!

"I was getting kinda used to being someone you loved..."