Kitty, Daisy & Lewis are a British five-piece band fronted by the siblings of the Durham family. Their music is influenced heavily by R&B, Blues, Soul, Punk, Rock and Roll and West-Indian music. They are all multi-instrumentalists playing guitar, piano, bass, drums, harmonica, banjo, lapsteel guitar, ukulele, xylophone, accordion and more between them. Kitty, Daisy & Lewis have sold over a quarter of a million records worldwide. Kitty Durham is the youngest of the group and primarily sings and plays drums, guitar, harmonica, ukulele and banjo. Daisy Durham, the eldest, primarily sings and plays drums, piano, accordion and xylophone. Lewis Durham sings and plays guitar, piano, banjo, lapsteel and drums. The band are renowned for building their own recording studio, which consists of mostly vintage analogue equipment and custom in-house built equipment. Their first two albums were recorded in the back room of their mother's house. In 2011 they began building their professional recording studio in Camden Town, where they recorded "The Third" (2015) and "Superscope" (2017). They've produced all their own recordings apart from "The Third" which was produced by Mick Jones. They have opened for Coldplay, Razorlight, Stereophonics, Richard Hawley, and others. The band are signed to former BBC Radio 1 DJ and Bestival curator Rob da Bank's label, Sunday Best, who released their second single "Mean Son of a Gun" with the B-side "Ooo Wee" which they first heard on a 78rpm record sung by Louis Jordan. This was released on 45rpm, CD and a limited edition 78rpm vinyl. The tracks were recorded at their home. The master lacquers were also cut by Lewis using his own equipment at The Exchange Mastering Studios, which is owned and run by his father Graeme. On 30 May 2011, Smoking in Heaven was released on CD and vinyl (double LP and 78rpm album), also on Sunday Best. On 26 January 2015, "Kitty, Daisy & Lewis The Third" was released. Their fourth album, "Superscope" was released on 29th September 2017. 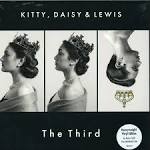 Share your thoughts on the Kitty, Daisy & Lewis Band with the community:

Know any other songs by Kitty, Daisy & Lewis? Don't keep it to yourself!

In Dolly Parton‘s hit song — who was the real Jolene?