Dolenz, Jones, Boyce & Hart is an album by the group of the same name, released in 1976. The group consisted of Micky Dolenz, Davy Jones, Tommy Boyce and Bobby Hart. Dolenz and Jones had been members of 1960s pop group/band The Monkees while Boyce and Hart had written many of the group's biggest hits such as "Last Train to Clarksville" and "(Theme from) The Monkees". As such, several publications, such as Allmusic, consider the album to be a Monkees-reunion album. Most of the musicians that appear on this album were featured on Monkees albums in the past. A majority of the vocals are done by Dolenz and Jones ("Right Now", "I Remember The Feeling", "You And I") with Boyce And Hart contributing backing vocals and the occasional lead vocal such as Hart's on "I Love You [And I'm Glad That I Said It]". Although the album failed to make much of an impact when originally released, renewal of interest in The Monkees led to its reissue on compact disc years later. The group was called Dolenz, Jones, Boyce & Hart because they were legally prohibited from using The Monkees name. Former Monkees members Michael Nesmith and Peter Tork were also invited to join the group, but they both declined. Peter Tork joined 'Dolenz, Jones, Boyce, & Hart' onstage for a guest appearance on their concert tour on July 4, 1976 in Disneyland. Later that year he reunited with Jones and Dolenz in the studio for the recording of the single "Christmas is My Time of the Year" b/w "White Christmas", which saw a limited release for fan club members that holiday season. 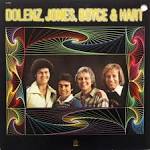 Share your thoughts on the Dolenz, Jones, Boyce & Hart Band with the community:

Know any other songs by Dolenz, Jones, Boyce & Hart? Don't keep it to yourself!