Dave Frishberg (March 23, 1933 - November 17, 2021) was an American jazz pianist, vocalist and composer born in Saint Paul, Minnesota. Frishberg resisted learning classical piano as a boy, developing an interest in blues and boogie-woogie by listening to recordings by Pete Johnson and Jay McShann. As a teenager he played in the house band at the Flame in St. Paul where Art Tatum, Billie Holiday, and Johnny Hodges appeared. After graduating from the University of Minnesota as a journalism major in 1955, Frishberg spent two years in the Air Force, then moved to New York where he played solo piano at the Duplex in Greenwich Village. Frishberg first became known for his work with Carmen McRae, Ben Webster, Gene Krupa, Bud Freeman, Eddie Condon, Al Cohn, and Zoot Sims. Later he was celebrated for writing and performing his own, frequently humorous, songs, including favorites "I'm Hip" (co-written with Bob Dorough), "My Attorney Bernie," "Do You Miss New York," "Peel Me A Grape," "Quality Time," "Slappin' the Cakes on Me," and "Van Lingle Mungo," the lyrics of which entirely consist of the names of old-time baseball players. Frishberg cites songwriter Frank Loesser as an influence, adding that Loesser's "Baby, It's Cold Outside" is (along with Willie Nelson's "Crazy") one of the songs he wishes he'd written.

Why Fight the Feeling: Songs by Frank Loesser [2008] 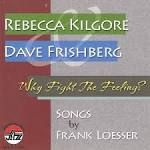 Share your thoughts on the Dave Frishberg Band with the community:

Know any other songs by Dave Frishberg? Don't keep it to yourself!

What are Kelsea Ballerini's 2016 and 2019 Country biggest hit singles?