Céu (Portuguese pronunciation: [sɛu]), whose full name is Maria do Céu Whitaker Poças, is a Brazilian singer-songwriter whose first American album was released on the Six Degrees Records label in April 2007. She was born in São Paulo, Brazil on April 17, 1980, into a musical family, her father being a composer, arranger and musicologist. It was from her father that she learned to appreciate Brazil's classical music composers, particularly Heitor Villa-Lobos, Ernesto Nazaré and Orlando Silva. By age fifteen she had decided to become a musician and by her late teens she had studied music theory, as well as the violão (nylon-stringed Brazilian guitar). Her songs reveal her many influences, which include samba, valsa, choro, soul, rhythm and blues, hip hop, afrobeat and electrojazz music.In particular, she cites as influences the music of African-Americans Billie Holiday, Ella Fitzgerald, Lauryn Hill, and Erykah Badu, as well as Brazilian Jorge Ben.Céu was performing onstage with major artists and exploring the repertoire of the marchinhas (turn-of-the-century carnival music) by her late teens. Soon after that she relocated temporarily to New York City, where she had a chance meeting with fellow Brazilian musician Antônio Pinto. She later learned that he was actually a distant cousin. Their relationship was renewed when he teamed up with lead producer Beto Villares, composer of the musical score for the movie O Ano em Que Meus Pais Saíram de Férias (2007), to help her record her album. Pinto, who produced Céu's song "Ave Cruz" is the composer of the musical score for two Oscar Nominated films, Central Station (film) (1999) and City of God (2002).Originally issued in 2005 on the São Paulo-based Urban Jungle, Céu was picked up by Six Degrees/Starbucks/Hear Music in the US and UK, JVC in Japan and Harmonia Mundi in France and in the Netherlands. Céu received a Latin Grammy nomination for "Best New Artist" of 2006.In 2009, her critically acclaimed second album Vagarosa reached #2 on the US Billboard's World Music charts. The album has since been nominated for a 2010 Latin Grammy Award for Best Brazilian Contemporary Pop Album. In 2010, Céu was invited by Herbie Hancock to record a version of "Tempo de Amor" for The Imagine Project album.In 2011, she contributed a version of the track "It's a Long Way" in collaboration with Apollo Nove and N.A.S.A. for the Red Hot Organization's most recent charitable album Red Hot + Rio 2. The album is a follow-up to the 1996 Red Hot + Rio. In 2012, Céu received her fourth Grammy nomination for "Best Contemporary Brazilian Pop Album" for her critically acclaimed third album Caravana Sereia Bloom.In 2014, she released in Brazil her first live DVD/CD entitled Céu – Ao Vivo, the concert was filmed in August 2014 in São Paulo and contains 15 tracks in total, including the never before released cover versions of all time classics "Piel Canela" and "Mais Uma Noite de Amor", behind the scenes footage of the band and more. Céu - Ao Vivo also includes live versions of Céu's greatest hits, "Lenda", "Malemolência", "10 Contados", "Cangote" and "Baile de Ilusão". 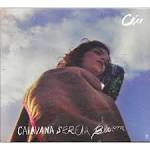 Share your thoughts on the Céu Band with the community:

Know any other songs by Céu? Don't keep it to yourself!

Which movie soundtrack brought second life to "Girl, You'll Be a Woman Soon"?