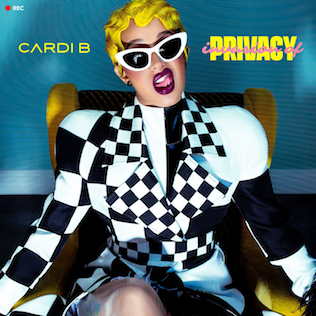 Invasion of Privacy is the debut studio album by American rapper Cardi B. It was released on April 6, 2018, by Atlantic Records. Primarily a hip hop record, Invasion of Privacy also comprises trap, Latin and R&B. It features production from 30 Roc, Allen Ritter, Andrew Watt, Ayo, Benny Blanco, Boi-1da, Cassius Jay, Cheeze Beatz, Craig Kallman, Cubeatz, DJ Mustard, DJ Official, DJ SwanQo, Frank Dukes, Invincible, J. White Did It, Keyz, Klenard Raphael, Murda Beatz, Matt Allen, Needlz, NES, Nonstop Da Hitman, Scribz Riley, Tainy, and Vinylz, among others. The album features guest appearances by Migos, Chance the Rapper, Kehlani, SZA, 21 Savage, J Balvin, Bad Bunny, and YG. The album was met with critical acclaim. It debuted atop the US Billboard 200, earning 255,000 album-equivalent units in its first week, with 103,000 coming from pure album sales. It has been certified triple platinum by the Recording Industry Association of America (RIAA). It produced five singles—"Bodak Yellow", "Bartier Cardi" featuring 21 Savage, "Be Careful", "I Like It" with Bad Bunny and J Balvin, and "Ring" featuring Kehlani. "Bodak Yellow" and "I Like It" have both reached number one on the Billboard Hot 100, making her the first female rapper to achieve multiple chart-toppers. The album set multiple streaming records, while all the thirteen tracks entered the Hot 100—all except the lead single charted simultaneously in the debut week. She became the first female artist to have all tracks from an album certified gold or higher by the RIAA. A number of music publications included the record among their lists of best albums of the year, with Rolling Stone and Time listing it at number one. more »